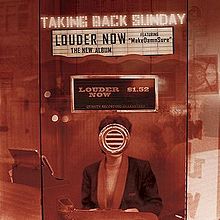 Louder Now is the third album by American rock band Taking Back Sunday, released on April 25, 2006 through Hollywood Records. The first single off the album was “MakeDamnSure.” The song “Error Operator” was released on the Fantastic Four 2005 film soundtrack, but was altered and revamped for Louder Now, resulting in the 2005 version becoming known as the “F4 Edit.” Louder Now was leaked onto the internet in its entirety on April 19, 2006.

The title Louder Now appears as a lyric in the song “What’s It Feel Like to Be a Ghost?” as well as in “Bonus Mosh Pt. II” from their album Where You Want to Be.