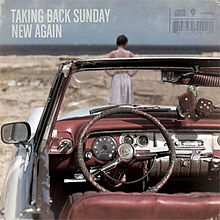 New Again is the fourth studio album by American rock band Taking Back Sunday, released through Warner Bros. Records on June 1, 2009. It is the first and only album to include guitarist Matthew Fazzi after the departure of Fred Mascherino in late 2007. The album was produced by David Kahne, with a selection of tracks also produced by Matt Squire. Additional production on all tracks was done by Jamie Siegel.

In 2010, after promotion for the album had largely finished, the band announced that Fazzi and bass guitarist Matthew Rubano were no longer part of the band. According to lead vocalist Adam Lazzara, they were amicably “let go.” Former band members John Nolan and Shaun Cooper soon reunited with the band to release their eponymous LP Taking Back Sunday in 2011. As of release of their eponymous album, the songs from New Again are rarely on the band’s set list, with the exception of “Everything Must Go.