Where You Want to Be 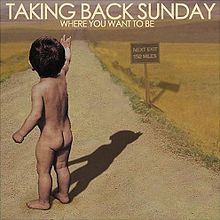 Where You Want to Be is the second studio album released by American rock band Taking Back Sunday, released on July 27, 2004 through Victory Records. This was a follow-up album to Tell All Your Friends after the departure of John Nolan and Shaun Cooper back in 2002. It is the first album to include past members Matt Rubano (former bassist) and Fred Mascherino (former guitarist / vocalist).

The second single of the album, “This Photograph is Proof (I Know You Know)”, was featured in the Spider-Man 2 Soundtrack.

The name of the album derives from a lyric line of the song “Set Phasers to Stun”.

An unreleased song of the band, “Follow the Format”, was leaked upon the Internet. This possibly lead the band to not include the song on the album. A bonus track featured on import versions of the album was a re-recorded version of the previously released “Your Own Disaster”.